Boeing Stearman is a well known antique biplane. Stearman Aircraft Corporation was an aircraft manufacturer in Wichita, Kansas. In 1934 the aircraft manufacturer became a subsidiary of Boeing. Although the Stearman Aircraft produced a range aircraft, it is most known for designing the Model 75, commonly known as the “Stearman” or “Boeing Stearman”. The Stearman (Boeing) Model 75 is a biplane that was used as a military trainer aircraft. At least 9,783 were built in the United States during the 1930s and 1940s. The sound of the Stearman plane stands out from similar aircraft and is considered something of a trademark. Post war the Stearman was used as a crop duster and a sport plane. Today many hundred Stearmans are flown by private owners.

In flight photo from a 1948 Boeing Stearman biplane in Kissimee, FL 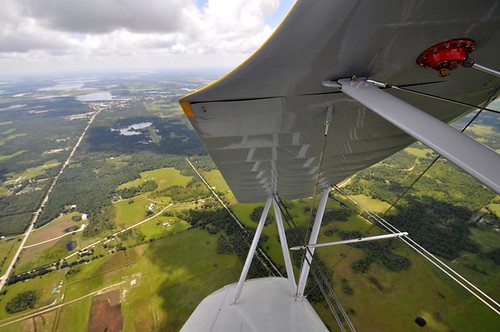